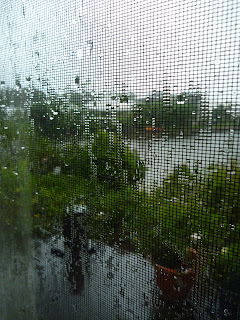 It began to rain within minutes of us walking through my mother's front door ~ & it continued to rain solidly all week.  I like rain but enough is enough & there is no escaping the fact it severely restricted our activities because no~one wanted to drive in the sort of monsoonal downpour that engulfed us all week. 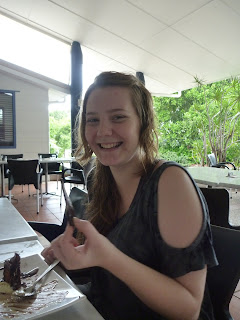 Australia Day was our first sort of dry day; our only dry day in fact.  We made the most of the sprinkle & headed out.  First we popped into the Leisure Centre to view The Dish ~ a movie we have all seen before but it takes such a quirky & gently satirical jab at the best & worst of Australia [& our love/hate relationship with America] that I still laugh myself silly. It is full of brilliant one~liners.  And who can forget the sight of the Aussie scientists playing cricket in the dish to level it up? Or the Ambassador's face as the band plays Hawaii Five~O thinking it's the American National Anthem?

[ Do you remember the Moon Walk?  Where were you?  We were dragged out of class to watch the grainy & impossible images & I was very bored.  I think I sorta missed the point.] 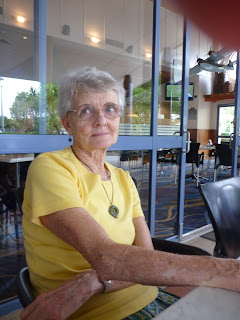 Then it was on to Trader Dukes for lunch.  Star was the only one able to manage dessert on top of mains ~ a mudcake that had Ma rolling her eyes & Star in seventh heaven. 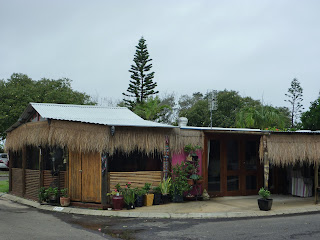 Despite the fact  lunch wasn't even interrupted by a light sprinkle the lowering clouds kept threatening something more serious so we cautiously went for a wander along the Maroochy River & through the caravan park.  Not to my taste maybe but the long term residents certainly get points in my book for creativity.  This lot went Hawaiian... 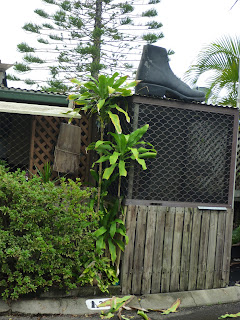 but this lot thought going for another Big Queensland thing [& seeing as pineapples & such like were already taken] opted for The Big Boot.  Whatever rocks your boat. 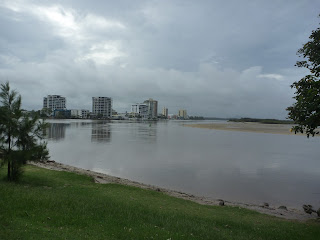 All along the river, & then the beach, the water was a fetid & putrid brown with ugly yellow scum.  The sand was littered with all sorts of debris that drew the kids like magnets.  We saw tepees & pirate ships made from the scraps but the jagged timber floating in the water just looked nasty ~ & this was after the clean~up crews had been through.  The colour of the water was a shark's dream come true.  Not the sort of water to swim in ~ but people were! 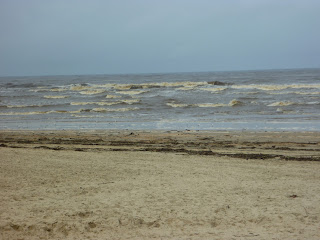 We beat the rain home ~ just.  Not that we let the rain bother us.  We played Racing Demon, Rummikub, table tennis, pool & darts.  We did jig~saws.  We talked a lot & we ate a lot.  We drank hot chocolate & nibbled on Ma's Christmas shortbread, saved for our visit. 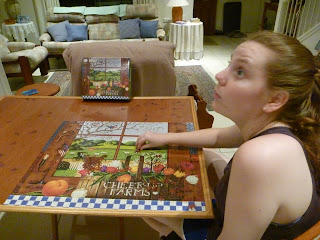 Today we came home.  Star drove.  I don't know what RACQ was thinking but their web site failed to notify us that the southbound lanes of the Bruce Highway were under water at Donnybrooke.  We crawled at 5mph for over an hour, got diverted, got screamed at & honked at by an irate truck driver [gotta love that road rage because none of his anger was going to make the traffic move any faster], got rained on some more & finally crawled in our own door to find that somehow the cats knew I was coming home today & were beside themselves with anticipation. 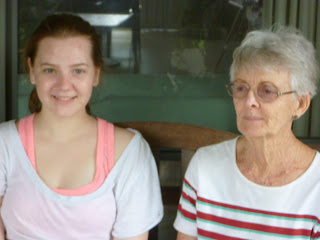 I'm glad you found things to do while it rained, and made up for lost time when it cleared up. I can picture the cats greeting you. :) We all missed your posts, Ganeida....blessings!

Is that puzzle a Charles Wysocki? It looks similar - I have quite a few of his works in puzzle form.