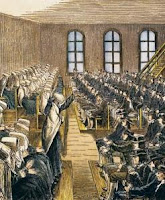 When we talk to God, we're praying.  When God talks to us, we're schizophrenic. ~ Jane Wagner

Oh dear, oh dear, oh dearie, dearie me. We are so quiet here on our little island, toddling along in our little Puddleduck puddle while the world spins by but it was brought home to me last night, forcebly, that we are more than a little odd ~ & we scare people.

Have you been following along?    If not, in brief, my darling oldest daughter applied for the mission field last year & was accepted only there was a hiccup so she is still waiting on clearance.  Meanwhile she has been getting involved in other things & one of those other things has been the OM prayer meeting once a month on Thursdays.  Here you can read about OM.  Here you can read about the sort of opportunities they offer.

The OM prayer meeting is not the sort of place you would generally find me.  Now don't get me wrong; I believe in prayer. I believe in corporate prayer. I will even admit there is a time & a place for prayer to be verbalised but .... I am a Quaker.  I go about things a little differently.  I am a big picture thinker; I rarely, if ever, pay attention to the details.  That being the case I rarely inflict myself on more traditional congregations & when it happens I try to fade into the background because I dislike making people uncomfortable & it is hard to discombobulate me unless you really attack me ~ & most people are far too polite to do that at a prayer meeting.

Now you have the picture I was surprised when Liddy said I'd been specifically invited to attend last night's prayer meeting.  Ooookaaay..... No kameeze 'cause I don't know these people.  Conservative pants & top & a discreet covering, a nice little blue & white tie~dye bandanna that shouldn't alarm anyone.  Liddy did pre~warn me that I wouldn't be allowed to fade gently into the background because people were constantly broken up into prayer partnerships.  Mmmmhuh. And that was the first problem. Would I pray first?  Not a problem ~ only I found people expected me to say something straight away before I'd even managed to gather my scattered wits; I was constantly being nudged to get a move along.  Yikes!  All around me people were galloping along at a great rate of knots exhorting the Lord loudly & clearly for very specific needs while I was meandering along chatting amiably about the Big Picture ~ raising up workers, ripe harvests, salt & light, as I do but struggling because just when I was thinking I might about centre & do deeper into prayer there was a loud AMEN, indicating we were all to change partners & the whole process started again for another worker in another country.  How do people pray like this?  It was exhausting!  But you know, this is part of Liddy's prayer team & it's important so I tried to stay with the boat you know, & not drift sideways.

So after two hours of this I was headachy & queasy so when one of the ladies who'd done the rounds with me asked about Liddy I was past being tactful.  As I used to tell the obstreperous boys who thought asking me embarrassing questions would disconcert me, "Are you sure you want to know because if you do I will tell you?"  So I told her about it being 10 years in the growing & about God having first dibs on Liddy & about the strange places He's led her wondering why she was starting to look a little wild around the eyes & as though I'd grown a set of horns & carried a little pitchfork ~ only to have Liddy inform me later this was the *church missions* lady & she had doubts about sending Liddy. *sigh*

You know, it would be so helpful if, before offering an opinion & telling Lid what she should or should not be doing, people actually spent some time asking the Lord so we could all get on the same page.  Ever so helpful ~ & I could take my feet out of my mouth!
Posted by Ganeida at 4:45 PM

Or, perhaps, you did exactly what the Lord wanted you to do at the time.

I have to say that this speed praying would definitely NOT be my thing either. I just cannot imagine Jesus doing this.

oh, I've known to have foot and mouth disease a lot! But as seekingmylord said maybe you did say exactly what you needed to say?
It will all work out fine I am sure for Liddy!

Seeking: That makes me feel so much better! lol So not the way I go about things but my way, we;;, we'da been there all night & in all honesty, can you see today's Christians doing that?

joyfulmum: I'm sure it will work out for Liddy ~ eventually. I do have terrible foot~in~mouth though & being tired, rattled & exhausted never helps. Funny, 'cause Lid seems to think I said the right thing sooo.... ☺

I get really stressed going to places I am unfamiliar with and would have found this very uncomfortable, not my sort of thing. And yes I also have foot and mouth disease-don't most mothers!!

I cannot get over this, the more I think and pray about it. Look at how it happened: You were invited. The whole thing was outside of your comfort zone. You were praying for people AND people were praying for you, right? You ended up talking boldly about your daughter's calling to the very person who has influence on the her going to Chile...without knowing who she was.

Ganeida, if you could step outside of yourself and perceive this all from a differing perspective...

If you had known who she was, you may not have been so bold, not in that setting. Most people, particularly Christians, look to other Christians for confirmation, and often consider heavily what is said by those confident in faith and purpose, because it could from God. As I see it, God prepared you and that was part of His plan. Shed your embarrassment and talk to Him about it...then tell us what the Lord had to say.

A hearty amen to what Linda wrote above...I'd say that your convo with that woman seems to have been rather divinely orchestrated. Don't fret dear friend, I'd say He's got it all under control♥

And if it helps at all, I utterly despise that sort of prayer thing. I really hate praying out loud in a group anyway- it seems to be more of a spectator sport than a spiritual exercise in my opinion.

And in other news.. we'll be getting a webcam this weekend, and Amelia will be setting things up for Skype!!!!! Are you interested in a wee bit of a chat by chance? I am so excited at the prospect. Let me know what/if/when works for you☺

Jo: being uncomfotable makes me a little giddy. After all, I'll probably never meet these people again, right?

Linda: Oh yes ~ & no. Pre~warned I might have been a little less dismissive of her opinion. I mightn't have dates set in stone but I am 100% confident Liddy will go & that will have come across rather bluntly. MInd you the OM leader is that confident also. lol

Persuaded: the prayer is what really rattled me. It seemsd so disorderly, unchristlike & shallow but Lid, who knew I'd have problems, took pains to point out on the way home that 1. it was the first meeting of the year so they had a bit of a backlog & really it's not usually like that [hm] 2. the main idea is to make people aware of the needs & [hopefully] they will go away & pray more deeply & in an ongoing way for people the Lord lays on their hearts & 3. this was a new format because they had several returned missionaries they wanted to give brief talks & an outgoing one [Lid, hopefully] Yes to Skype only I'll need to work out how far behind us you are. I'll get Liddy on to that one. BTW if she gets a stopover in NY on her way to Chile she is to ring you. lol

I add my amen to the other amenners above, Ganeida.

I prefer quiet, thoughtful, unhurried prayer, and attend a church where prayer is a bit more like you described in the meeting you attended. I am still trying to find my way. So glad the Lord can read our hearts. It's people we have to worry about. God bless you and your family....love your writings.

Thank you Julie. I talk at a hundred miles an hour but I only pray like that if I am rattled & worried ~ which I'm not normally. I figure God's got plenty of time so what's the rush? Like Diane I'm not used to verbalised prayer so it was a little nerve wracking all round.

Persuaded ... I hope you realise that first time Skypers so have to put up with me ... we are actually a little insane ... greatly looking forward to the best real life version we can manage currently ... so, defs have to pick a time I'm home! :)