It's really the cat's house - we just pay the mortgage. ~ anon 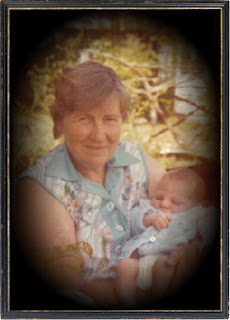 My Aunty Shirl gardened & painted ~ pretty much in that order.  She did have a husband ~ & a fistful of children but they were no impediment to her true obsessions: dirt & paint.

Over the years my aunt moved house any number of times & while the builders laboured over roof trusses & floor joists my aunt scrabbled frantically in the rich red volcanic soil to produce a wild & tangled garden that would hide the ravages of the builders.

Trafalgar Vale was the house I knew & loved.  It was old.  It was geriatric.  It was falling apart & my aunt was not the sort of woman to have the sort of money needed for repairs. If I had been older I would have happily plonked down money for this monstrosity.  Perhaps happily I was too young to do more than mourn its passing.

For a while Shirl had a place on Mt Tambourine overlooking the Canungra Valley & the Gold Coast.  The view was spectacular but the garden was steep & the house little more than a ticky~tacky bread & butter box.  I was not enamoured of the house.  I liked Tambourine ~ still do, but the worms grew to the size of fat snakes & scared the living daylights out of me when I went walking barefoot at night.  It smelt all wrong too: too new paintish; too clean; too modern.

Then Shirl moved out Rathdowney way.  Yep, the same Rathdowney where Lid was working with alpacas last year.  I was a new mum & at Toowoomba with a brand new baby I wasn't quite sure what to do with. Following my aunt's uncertain directions & my own lack of direction I ventured out along the backroads between here & there for the occasional visit in a house that was half~finished with half the extended family already moving in. 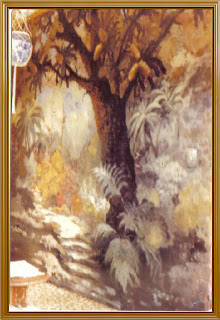 I arrived the first time with a 5 week old baby to a bare house & a yard bereft of even a blade of grass.  The drought pretty much made gardening an impossibility so my aunt's attention unaccustomedly wandered to things housebound ~ always a dangerous preoccupation.  For 2 meals my aunt & I stared unhappily at the pristine white of her brand new living room wall ~ a large blank canvas that desperately needed something to lift it out of the doldrums.  "What it needs, " my aunt said dreamily, "is a tree or two."

And so she put them there. It was a charming mural, the only drawback being that she could not take the wall with her when she moved house again.  Gotta wonder what she's painting on Heaven's walls now?!
Posted by Ganeida at 4:00 PM

She's probably painting trees while my mother does the flowers :-) My mother inherited an old gypsy caravan when she bought her house on the coast. She painted the caravan mission brown and then stencilled leaves and flowers (Tudor roses - go figure) all over it. It was the focal point of the street for years - and a great sleepout.

Even after fourteen years, I am still eying my hallway for a mural, but my husband still would say no. He lets me have my way about most things artistic, but he does have some boundaries.