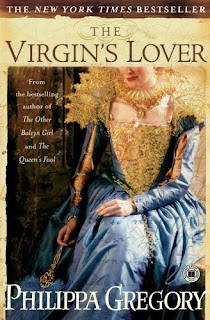 Although my royal rank causes me to doubt whether my


kingdom is not more sought after than myself, yet I


understand that you have found other graces in me.  ~ Elizabeth I

You ever read a book that makes you hopping mad with steam coming out your ears?  I got me one of those.

I am reading Gregory's The Virgin's Lover ~ awful title.  It sounds completely disreputable  ~ which is not so far off the mark.  Ok, so the daughter of Henry Tudor & Anne Bolyn was hardly likely to be chaste & I certainly knew the rumours about Robert Dudley & Elizabeth before I began ~ & certainly Elizabeth's vanity was obsessive, to say the least, but despite the fact Elizabeth was a Tudor with all the Tudor faults [the temper, the libido, the arrogance, the vanity] I always had rather a soft spot for her as a clever young woman who survived the court intrigue ~ including the whole country's mad desire to marry her off to anyone who would have her!

I do not like Gregory's Elizabeth.  She is snivelling.  Vapid.  Wishy~washy.  Even given how young she was, how tenuous her position, how insecure & that historical documents do portray Elizabeth in this less than flattering light during the early years of her reign, she was possibly the best educated woman in all of Europe & it beggars belief  that she was as gullible as Gregory portrays her.  On the other hand I could well believe she played her court like a court musician!

Then there is Dudley & a smarmier, more ambitious man it would be hard to find.  No woman in their right mind would trust him with their heart for a moment.

To say nothing of Dudley's wife, Amy, who is portrayed as quite the wrong wife for him: small minded, tedious & bourgeoisie.

There isn't a likable character amongst the lot of them.

But what really gets me wild is the backdrop because this is the England left divided by Catholic Mary & the nominally Protestant Elizabeth, with Edward briefly thrown in for good measure; a land where you could lose your head for believing the wrong thing; a land where one's religion could make you lethal enemies,  lose fortunes, cost whole inheritances.  You would think people would have a greater care for their immortal souls.  Their shennanigans make the 21st century look like a toddler's day out.  Yes, I know they didn't have access to a bible but they did have access to the Holy Spirit.  What were they thinking?!

Meanwhile, over in Spain, they're fanning the flames of the Inquisition...

All this in the name of God.  Give me a good Pagan any day!
Posted by Ganeida at 4:34 PM

Elizabeth I - a remarkable, strong, intelligent, extraordinary woman. Sounds as though Philippa Gregory may not quite have got it.
I got the same fireworks going off in my head when I saw the film portrayal of Elizabeth II in "The Queen", with Helen Mirren in the title role. They seemed to be under the impression that the Queen divides her time between picnics, afternoon tea and watching telly, and that the Prime Minister spends his evenings cooking fish fingers and catching up on the news. Dorks.

Ah, Ember. A woman after my own heart! Yes, much as I admired Mirren's portrayal [like her as an actress anyway] I though the scriptwriters were remarkably tedious because the job of government is...well, government.

Elizabeth 1 is remarkable. I guess I was disappointed less of that remarkableness came through in this novel. Ah, well, I should dearly like to know how she managed to not concieve a bastard heir. Can you imagine what would have happened in English History!

I try and stay away from novels that portray English history as Philippa Gregory does, I spend all my time checking the "facts" to see how true they are - I like my history to be accurate - a little fussy I know :)

Jolouise: I've generally found Gregory pretty accurate but this time she has annoyed me. I know, 'cause the documation is there to prove it, that Elizabeth was percieved as vacillitating wildly. My interpretation of that is that that wiley woman was playing her court for fools.