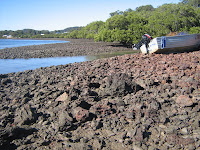 Another day. The rain is drizzling down again. After crawling through town yesterday in peak hour traffic & completely unable to find parking I parked illegally & sat in the car. When the nice ticket lady came round I gave her the sob story about being from out of town [which is true] & not being able to find parking. She was very nice but told me that as I was parked in a loading zone & was only supposed to be there for two minutes not to get out of the car! [I should like to point out that said loading zone was all the parking behind QPAC that is only used for the markets on Sunday but we're not supposed to park there anyway. What a waste when parking is in such sort supply! All the lovely people I watched go into the concert hall got tickets.]

At some point I knew I would have to get out of the car & go & get Ditz. That being the case I braved the traffic again. This was not one of my better ideas. Firstly the traffic had in no way dissipated as there was an Australian idol concert in Southbank & a concert at the concert hall & no~one could find parking! I'm a Sydney girl. I figured I could drive in a grid pattern, not get lost, & have plenty of time to walk back for Ditz. As if Brisbane would ever be half so accommodating! It is an absolute warren of one way streets. Unfortunately most of them take you away from the direction you want to go. There are something like 7 bridges across the Brisbane River. I crossed at least one of them & nearly died. Have I mentioned how much I hate Brisbane? Time was a~ticking away & I began to worry I'd never find Ditz again, let alone the road home. Round & round I went like a rat in a maze then I saw it! A familiar street! Unfortunately I couldn't get to it. Round & round I went some more, finally found a road going the right way & found myself bailed up by the police!

Look, I know they've got the world's worst job & that they are only doing their job, but the sight of a blue uniform flagging me down brings on a massive guilt complex & you do not want to know the half of what I'd been doing in Liddy's car trying to find my Ditz. Logic was long gone. There is no way I had been busted driving illegally [what does it say about Brisbane drivers that I wasn't even getting honked at?] but I nearly ran the poor man down in my anxiety. He poked this little thing like a whistle at me & asked me to blow. I looked at him like he was insane. Seriously. I'm driving a child round town & he thinks I'm going to tipple on top of that? Drinking has never been my thing though I will concede that on occasions I drive as if I have been drinking. In the 30 odd years I have been driving I have never been breathalysed before either so I had no idea what I was doing. I was asked to breath harder. He had to be joking. I was hyperventilating so much it was a wonder I was breathing at all.

Finally released I scuttled into the original parking space thinking unmentionable things about Brisbane & feeling that it was worth a ticket to have parking & somewhere familiar. As I rushed to get my Ditz the police car cruised past me. I was beyond sanity. The one thought in my head was to grab my child & bolt for the safety of my little island haven.

Worse was to come. Ditz appeared battle worn & swearing that however bad my evening had been hers had been worse. The ensemble had been yelled at for 3 hours solid. Ditz says it was so awful some kids will not come back next year. I am not surprised about the yelling. The influx of public school kids has not been good for the ensemble. They were loud & obnoxious & not prepared [which I knew from standing about waiting for the stage hand to come & escort them backstage] & Alison got some very negative feedback. I had an e~mail for Ditz in my in~box this morning, the sort of e~mail I definitely would not like to receive. Now is not a good time for Ditz to display any artistic temperament of her own. Alison is not a happy lady.

I've done enough theatre work to know that nothing is less child friendly than theatre & music more than most. You have to be professional. No allowances are made. So this morning I have to go & buy starch & safety pins, hair spray & bobby pins & hope that I'm not allergic to whatever spray we get all because a few of the girls could not get their act together. To say nothing about the fact Ditz has been carrying a 1/2 dozen white shirts in her bag because other girls don't have one & her make~up supply is almost gone thanks to people borrowing it because they don't have their own. Ditz's make~up is just for ensemble, not for every day, so I am not a happy mummy. It's expensive & my child is not in a private school.

On the other hand, despite persistently making a wrong turn every single time we've gone in to town, we are finding our way home again with very little trouble, so much so we made the earlier boat last night! Yay! And despite the yelling & having to go up & down the stairs a zillion times & despite how hot it got under the lights & the choir robe making her broiling hot so that she nearly fainted on stage [take with a pinch of salt; this is Ditz we're talking about] Ditz sang all the way home so things can' have been impossibly bad.

One more rehearsal to go & then the concerts! I can't wait to be all done.

Good Grief! well they do say a bad rehersal is essential for a great performance :o)
The early boat sounds like welcome relief...