The word theatre comes from the Greeks. It means the seeing place. It is the place people come to see the truth about life and the social situation. Stella Adler

We have tickets! After all the hassle I would not have been at all surprised if they had gone missing in the mail but they arrived safely on Friday morning. Now I just have to make sure I don't lose them & take them with us on Friday. 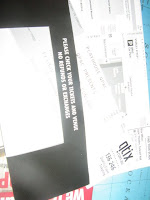 Working in theatre has a lot in common with unemployment ~ Arthur Gringold.
I think working in this area requires a certain mindset; not talent, not skill, but the ability to endure long periods of boredom with equanimity. Seriously, you try standing round under hot lights for hours at a time not moving, not allowed to talk, while the stage director, the lighting guy & the sound man all discuss, at great length, their differing requirements. I think my daughter is quite mad but then there is the audience & the applause at the end of it all & my darling Ditz dearly loves an audience.
We had one dry day [yesterday] & I did three loads of laundry before the clouds started rolling in again. Everything is sill damp & on the line because the air was heavy with moisture so nothing actually dried & now it will get rained on. An extra rinse! 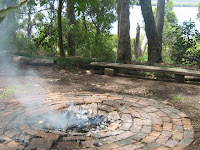 It was terribly steamy. Iss found the coolest spot on the verandah & collapsed in an unhappy puddle of fur. I took the opportunity of a relatively still day to burn some rubbish in our fire pit but Liddy was babysitting an active 4 year old & has totally sworn off ever having her own kids! She absconded with Dino in the boat for several hours leaving Ditz & I in charge ~ well Ditz really because one hyper child was way too much for me to deal with.

Liddy had planned to cook with the child but this child did not want to cook. She did not want to crack eggs & beat things together with a wooden spoon. Lid was flabbergasted. What child does not like to cook? Where she wanted to be was on our deck. The one place we really didn't want her is on our deck. No railings yet & a lovely big drop but of course the cat was on the deck & yes he ended up scratching her. I'm pretty callous that way. Annoy an animal you've been told to leave alone & you deserve everything you get. Poor Ditz, who wilts in the heat & gets headachy, dutifully trotted round after her small charge ensuring she survived her visit with us.

Normally between Legos, cooking & painting we have no trouble entertaining small charges but this was a techno kid & if it wasn't electronic she didn't want to know about it. We are short on electronic gadgetry. Liddy took her for a couple of short walks but we were all rather relieved to return her to her owners.

Wish us luck. In a few short hours we begin the first of the mainland trips for rehearsals. The wind is picking up & there is rain a~coming. Going to be an interesting week. I can feel it in my bones!

Smirking slightly at the child, I was a terribly mean childminder a few years ago, very popular though... probably because I actually played with the children, anyhoo glad the tickets appeared.
xc

I've seen you mention hanging clothes out before - do you guys have a dryer, or is that not common there? (oh that sounds awful LOL ...but they are NOT common in many places!) ...we have a line to hang on as well, but stuff will walk away if I leave it out there...I don't know if there's a line at the new place..

I've got a techy kid cousin, used to babysit him - hardly ever wanted to do anything but play his video games and such...

Good luck with the mainland trips, rehearsals, and everything! :-D

Moly, my clothes will dry outside in an hour or two in summer. We rarely use our dryer. We don't get stuff nicked on the island & sunlight is free. :)

*most* of the time, what walks away comes back - it's often kids snagging a blanket to play on...but my lines are all saggy anyway...I'm spoiled, use the dryer way more than I ought! :-P