My family loves me. 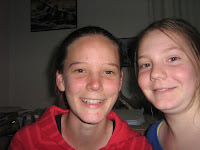 A mother's treasure is her daughter. ~Catherine Pulsifer

My family loves me ~ yes they do. They have been talking about me behind my back, fretting over me as if I were some rare & delicate porcelain in danger of being damaged. They have a well developed sense of self preservation. It is not good for them when mummy starts to lose the plot big time. And I thought I was doing so well...

Well, I think I'm doing well & everyone just wants to keep it that way! Dearest knows full well that if it wasn't for his broken back he'd be doing the driving in & out of town for Ditz. Liddy wants to do the driving; hours, she needs all the hours she can get. So Dearest talked to Liddy & Liddy talked to her manager & the upshot is she starts extra early on Wednesday so she can drive into town for us. Her manager didn't even quibble. 'That'll be for Ditz, won't it?' Everyone knows about Ditz.

Frankly I think Liddy's just peeved that she's missing out on something. I can't think what. From either Ditz's or my viewpoint it's all pretty boring but whatever. I know I will appreciate the company. That means I will only be on my own Tuesday & Thursday.

It's all very well for people with money. They can go & take in a show or have a decent feed somewhere but all my spare cash is going on getting Ditz & I in & out each day. There is nothing over for luxuries so that limits how I can spend my time while waiting & being town everything is even more expensive. Having someone to do nothing with is so much more fun.

Dearest is breathing a sigh of relief. He prefers his women to travel in a pack & is happiest when we are all together. He thinks that is how things should be. Occasionally when the hormones get out of control he has second thoughts but mostly he prefers that we stay together. 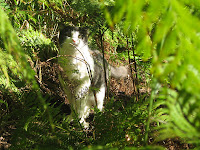 And then there is Iss, who is peeved beyond measure at all these prolonged absences & made his displeasure known last night by parking his substantial behind behind the car when I was leaving to pick Liddy up from work. I removed him twice & he shot straight back. Being a Himalayan/Burmese mix stubbornness is rooted deep in his genes so I picked him up & shoved him in the car with Ditz. I fully expected he would squawk & protest all the way to the shop & back but there is nothing remotely normal about that cat. So long as he was with his people he was prepared to enjoy the ride & just got more & more owl eyed. I'm telling you, this is not normal cat behaviour! Most cats hate like poison being in a moving car & make their dislike known with loud yowls. Not Iss. He was curious as a mongoose about everything, sitting up as tall as he could on his haunches to get a better view of all that was going on. Weird. That animal is so weird.
Posted by Ganeida at 12:59 PM

Sounds like you guys have a LOT going on : ) I am still trying to keep up with who is who (LOL) but I figure that in time I will straighten everyone out. I think I am confusing your pets with your kids at this point : ) So is all the travelling back and forth part done by boat or ferry or a bridge? I have always wanted (like so many others : ) to live on an island but I am sure that it can get quite difficult to get to the mainland. Well I am enjoying your blog so much! I am glad I finally stopped by!

Welcome Ash. I'm glad you stopped by too. :) We have a 1/2 hour boat trip to get to the mainland. All told the boats add anything up to an hours travelling time to any trip & they stop running!!!! Early in the week our last boat is 10pm. Later on it's midnight, which we are unlikely to miss.