Meet me at the Ferris Wheel. 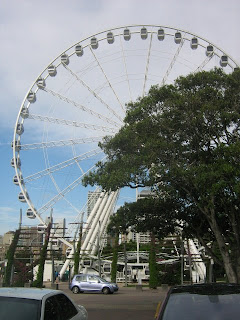 e cities. Benjamin Franklin
Designed to be part of the Word Expo '88 this monstrosity
sits outside the Playhouse theatre. It's unmistakable so I guess is a good landmark & the Japanese tourists love photographing it. It is also expensive ~ $1~ a minute = $15~ for 15 minutes. I'm told the views are spectacular but I don't like heights & Liddy didn't like the cost so we didn't go on it but every day this is where we met & watched busloads of Japanese tourists unload & begin photographing the thing. Strange. 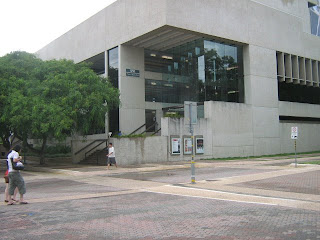 The kids all congregated on the Playhouse steps waiting for their stage manager to escort them down the side of the building to the stage door. Ditz insisted on taking us backstage last night. Very funny. I've been backstage before but Liddy was shocked. Slothing in luxury, she is quoted as saying, & mightily peeved because soccer never provided a pool table, vending machines , bottled water & luxurious chairs. I guess soccer stars don't throw he same sort of tantrums that show biz stars do. 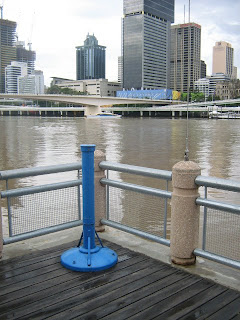 This is the bridge at the end of Grey street, one of three that Liddy managed to cross last week. We figured given enough time she'd find her way over all 12 of them! She managed to cross a different bridge every night & we have no idea how she managed it! Driving with Liddy is certainly an adventure. The only time I got a mite peeved was the toll bridge. We paid twice to go nowhere. For some strange reason Brisbane boasts about having more bridges across its dirty little river than any other Australian city. I'm sure there's a reason for that but I have no idea what. 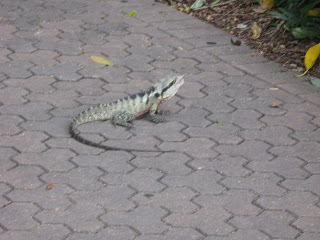 I find Brisbane an odd city. There is the river, which competes with Melbourne's Yarra for being brown & dirty. Being a Sydney girl & used to the pristine blue of the harbour I find it really hard to get enamoured of something as brown & ugly as the Brisbane River but Brisbanites seem to be quite fond of it. That being the case I have never understood Southbank.
Now don't get me wrong. Southbank is lovely. It is refreshing to walk through the 17 hectares of subtropical parklands or the boardwalk beside the river, or to catch a ferry from one of the many jetties. But don't you think it a tad odd that the council then built a manmade beach & lagoon right next to the river? It is hugely popular but I still think it is a really peculiar thing to do. The wildlife has no objections.
The restaurants, all 30 of them, I do understand. They do a roaring trade at night. 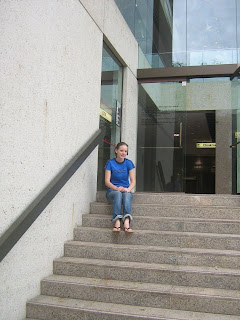 My mother came for the matinee performance on Saturday.
We waited for her on the Playhouse steps. [I never asked but that's probably illegal too. We seem to have done a lot of that this week] She arrived shortly after we did looking immaculate as always & peering about anxiously for her entrance. Luckily after a week in town we knew where the important things like food & loos were, though I don't recommend the Parkland loos. They have sand all over the seats & wet puddles on the floor from all the little swimmers who use them~ which is a good thing & not to be sneezed at. Far better than just piddling in the water that everyone else wants to swim in.
Ditz, who was excited to have Liddy & I in her audience last night, could barely contain herself at having Ma come down to watch her performance. She has made it big time if Ma will part with good money to come & watch her! Strange child. She was very...um...ditzy & introduced Ma to half of Vocal Manouevres before we could escape. We took Ditz to eat after the performance & then walked Ma back to her train. It was a very brief meeting but not having seen her for a few months lovely just to see her & catch up
.
It was 1 am before we all got to bed last night. Poor old Lid is working today & looked like death & high water as I walked her out the door this morning. That's certainly how I feel & Ditz, lucky girl, is still very soundly asleep. I am having a very quiet day before I deal with the nightmare of flute exams. I can't wait for the holidays!
Posted by Ganeida at 2:54 PM

eeeek! I would *so* totally cough up the fifteen bucks to ride that thing! That one and the one in London - I have a friend there and she's taken pics of their giant one....so cool! (okay, yeah, big ugly monstrosity - but very cool too LOL)

aw, shame Liddy couldn't get the day off to sleep in as well... I can't do those sorts of late nights without looking like a dog the next day....

is that...some kind of baby crocodile? (the screen on this laptop doesn't show pics the best)

12 bridges? they should get creative and go with a few hovercrafts or something :-P

The holidays are coming, they really really are... ;-)

That, my moly, is a lizard ! Either a water dragon or a frill neck. I can't remember & now I can't tell from the pic. lol.

Goodness what a day you have with those girls. Poor liddy and lucky Ditz. It sso neat though how Ditz as made it to the stage like that.

I would go beserk with all those bridges and ferries and stuff. I dont know how you all do it!

I have certainly enjoyed reading about your week. I had to do it all in one go, as I've been too busy to keep up with my blogs. You said the performance was televised - do you know if it's available online somewhere?
I'm glad you got to see it, and I know you are glad it's over. The things we do for our children!

I'm with you on the Ferris wheel. I don't like them because it seems too easy to slip out of and fall to one's death. I was trying to think of how I could put a cheerful spin on that and decided I couldn't.

MamaO, I will ask but I don't expect even if it is that it will be on~line before it goes to air, which I expect will be sometime in December. They taped the Saturday night performance. I'll let you know either way.

Mrs D,
I'm not sure I think Ditz's advent into the arts is cool. It's a big ask of a little girl to treat people well yet remember they are living ungodly lifestyles & not to emulate them.

MrsC, if you like our lizards wait till I show you the moth I photographed yesterday! lol.