Cooking is like love. It should be entered into with abandon or not at all. Harriet Van Horn 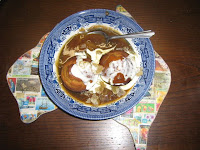 My household likes its food. Unfortunately for them I do not like to cook. No, I don't leave them to stave & when they were younger I cooked with them a lot: bread & rolls, cookies & cakes, pies & pastries, salads & pizza. My kids are good cooks but although we all have a sweet tooth I stopped making deserts years ago. I just don't have the time generally to muck round & I'm too tired to be bothered but it is raining at present, the heavy, slushy, summer rain that will last the week. When it rains like this Dino doesn't work & when Dino isn't working he comes home because home is where he gets fed & can fish & crab to his heart's content. When Dino is home for any length of time he expects desert to arrive after his mains. I think I said I don't cook. So he starts leaning on Ditz.

Lean on Ditz hard enough & long enough & she caves in. She always does. Dino put in his order: ginger muffins. Now my cook books are pretty old & have been used so much [& by the kids at that] that they are falling apart. The muffin recipe was missing. *sigh* I went on line & dragged up another one which is not quite so nice & Ditz went to work. Ditz is particular. If she was cooking there are certain requirements & Dino was going to pay for the extras like cream & diced ginger.


Ditz is a pretty good cook & she has learnt something about managing disasters because we were busily scoffing down muffins when Ditz let out a wail. 'I forgot the eggs!' If she hadn't said we'd never have known. The muffins were very good.

Along with muffin eating was reminiscing. This is the Minack theatre at Porthcurno, Cornwall. The brainchild of Rowena Cade, this is one of the most fantastic theatres I've ever been in. She built it with the help of her gardener & it is really something. Dearest couldn't remember where it was but I said, 'Look at those boulders. There's only one place we saw cliffs like that ~ Cornwall!' It's just up from Land's End & Land's End, as we all know, has Tintagel Castle & Tintagel Castle is the birthplace of Arthur, the Once & Future King! I should have liked to have gone to a performance here but the season was finished when we found it.

I turned 21 in Cornwall. My birthday treat was a *real* Devonshire tea [clotted cream is to die for *swoon*] & a trip round Tintagel. We had a lovely day for it & on the whole England's weather wasn't kind to us. Cornwall provided sunshine & spectacular views ~ & Arthur! Whoever he actually was I think it's rather special that a 5th century warlord is still remembered with such love & pride.

I hope and plan to head west at some point. My baby's middle name is Arthur, after all. :-)

Those muffins sure look interesting. Our tastes run a bit simpler; Taryn made a chocolate chip pie for the past weekend and it didn't last long.

choc chip pie? mmm
Having spent many years catering for the masses the novelty has well and truly worn off, I never loved cooking, I just wanted to run pubs and the female HAD to do the cooking, even though mr Hojo had started to train as a chef in a previous life... it mattered not! Loving the summer weather, requires little cooking at home and as we have just built the barbie, I am expecting great things :o)
We have also had some lovely times in Cornwall, also never managed to see the theatre in use though.
xc

Ah, I figured you couldn't possibly be that bad as to trash two blogs in as many months...;)

I was only thinking the other night that there had to be some other problem...glad it wasn't you!

A shame to have lost it all though...stupid question, had you saved your other blog posts somewhere?

I have the exact mirror blog at wordpress.com and only go there to update and copy everything over. That way, if blogger eventually eats my posts, I'll still have a copy of them all somewhere...

Might have to come and fix your computer after all...;)

And did I mention...that its raining here? Better blog about that too!

Love the Aussie placemat LOL! Hope you are settling in well at your new blog

Congratulations mrsC, you are the first to notice & Ditz, Liddy & I made a buch of these out of used stamps. :D Dearest did us the templates.

I don't get so attached to blog places...only blog people. Bit like my cat that way. The people matter, the place doesn't.

Hojos, we really need to get together & compare notes:P

Duchess, just don't tell my bother & SIL, the computer techno freaks, ok? I'll eventually move anything I really want to keep over here but I'm not too stressed about the whole thing. It's a blog & by definition dispossable. :)

mamaO, I wish I was over there with you. We'd ditch your bundles of joy on Bob & take of for Arcadia! lol

I've never seen muffins floating around in a sauce before - cool! I'm not so sure I'd like them myself, just because I'm not really a fan of ginger (I've had both the sugar/dried and the pickled - and they taste like soap! -- but then, I *do* like gingerbread cookies...go figure.) but they look really cool!

I love the placemat too! :-D

What a beautiful outdoor theater - I was looking at the panoramic picture where you can spin it 'round...awesome!

If I confess to not knowing much about King Arthur, will i get tossed from your blog? :-P

moly, I don't toss friends. Haven't you learnt that from the way I frantically chased you all down during the blog fiasco & made sure I had you all safely tucked in the new corner of my world? Stick around long enough & you will be educated about Arthur & other oddities of the Celtic Way.