... and now for something different.

"If everybody is thinking alike, then somebody isn't thinking." –Gen. George S. Patton 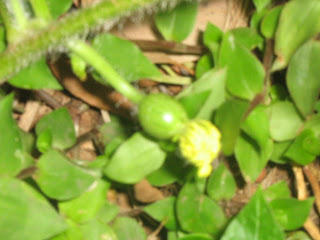 All the rain we've had has been very good for my garden. Lookit what we're growing! Really truly watermelon. The vine is running rampant & while not much fruit has set as of yet we have plenty of flowers so I am hopeful, especially if the rain keeps up. 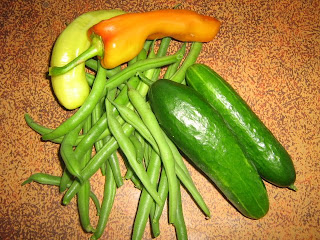 Not having been home for a week it was an absolute pleasure to wander through my garden in the cool of the evening & find there was so much ready to pick: capsicum, beans & the first of the cucumbers! Liddy saw the cucumbers & declared them *store quality* They also didn't make it to the table before people were helping themselves. I have a lot of fruit set so we will have a glut of the things before too long & then no~one will want to eat them. The kids are eating the nectarines. I really need to prune that tree & fertilize it properly once the fruit has finished 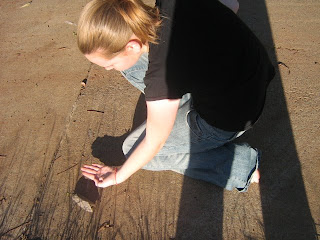 Then when Ditz & I went to the car to go for Liddy we found this. I know it is a little hard to see but the lump beside Ditz's hand is an emperor gum moth, which can grow as large as 6cm & have a wing span of 120~150mm [up to 5'']. This was a male. They are larger & have distinctive feathery antennae. Once hatched from the cocoon they can't feed so have to rely on their stored energy to complete their life cycle of mating & reproducing so have a pretty short lifespan . 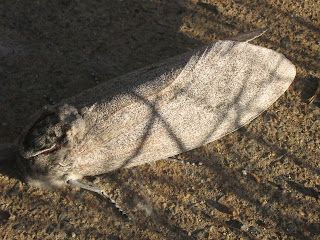 This one ended up as lunch for the butcher bird. I'm fond of butcher birds but they're carnivores & have some pretty grotty habits. There is a reason they are called butcher birds. Ditz was hoping the moth would still be there to show Liddy but as soon as we left the butcher bird returned for his snack & it was long gone by the time we got home.
Posted by Ganeida at 12:55 PM

The moth usually emerges from the cocoon the following year (in Spring or early Summer) but depending on weather conditions can stay in the cocoon from anywhere between two and five years. One case has even been recorded of a moth emerging out of the cocoon after 10 years.

Wow, they can stay in their cocoons for a long time! Patient little (big) guys!

I'm envious - your veggies look delicious there....the fresh fruit and veggie selection here is...well...northern community, winter...yeah there's nothing growing (obviously) and what's trucked/flown in to the stores is pretty sad looking....I wonder if carrots and beans can grow inside the house??? *grin*

surely even a butcher bird would need somthing to wash that monster down? ;o)
xc

A full bodied Australian sauvingion might be more their style given how *gamey* they like their meat. Eeeew!

Moly:
Yeah, surprisingly up north has the same problem with fresh stuff thanks to the *big wets*. Tinned/frozen fruit & veggies I can handle but I can't stand either powdered or longlife milk. Too gross.