“It is my belief that everything you need to know about the world can be learned in a church choir.”~Connie Willis.
All it takes is one wrong turn ~ & we took it!    Argh.  Serious meltdown.   Did I ever mention how much I hate Brisbane?  Round & round we went, totally clueless but when Star wedged me in the busyway I lost it.
So this morning I rethought things because getting home is never an issue.  We fly like an arrow to the mark.  Last night we came down the highway  so I looked at the map again & decided to be very brave & try going in on the highway.  I've never done this & I hate getting on & off the highway in high traffic areas.  So confusing with all the lanes travelling at 80~100ks & big green signposts looming disturbingly soon but I thought we might just manage 2nd time round.  And this from the woman who swore last night she was never, ever driving in Brisbane again!  Serious lack of confidence.
I showed Star the grid we needed to work, counting of the lights before we needed to turn & though we had to do the circuit twice it was not a drama & we ducked into the right car park with loads of time to spare ~ unlike yesterday when we couldn't find a car park that didn't shut at 6pm & drove round & round frantically till we finally found metered street parking ~ which was a drama all on it's own.  These things take credit cards these days.  I tell you, it is all too much for me.  We were late for rehearsal & so disorientated Star took off in the wrong direction.  Brisbanites are a friendly lot & we were redirected & rerouted in the kindliest fashion. 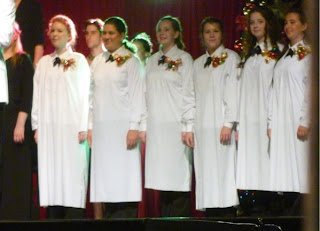 The robes get dragged out once a year for these things.  Star is third from the left singing altos. 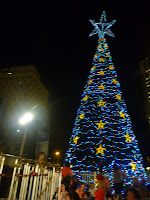 And the tree looked rather super once it was all lit up like a sparkler.
One down; two to go.
Posted by Ganeida at 5:08 AM

I think you are very brave. I will confess here that I have only driven in 2 cities, both more like country towns (Darwin and Canberra) and as a result I am not sure if I could cope on roads in Brisbane or Sydney. I always let other people drive if I am in Sydney because if you are in the wrong lane, you are stuffed.

Jo: it is very heartening for me to know others struggle too. I feel such a dill for not coping well ~ & I'm a Sydney girl. Never drove in Sydney. lol The only city I think is worse than Brisbane is Paris. Even their own coppers don't cope with Parisian drivers! You are so right about wrong lanes! OK if you know you're way around & what you are doing but quite bluntly I don't & Star's navigational skills leave a little to be desired. lol We are working on it but they always seem to come apart when we need them most! ☺

I'd be the same as you Ganeida! I'm a Sydney sider and I still REFUSE to drive in certain parts of Sydney; thankfully I have a very dear hubby who though not from here originally knows it better than I do and is happy to oblige:)

Oh, Rosemary! Thank you! I find it so nerve wracking. I'm not made for these high powered cities.