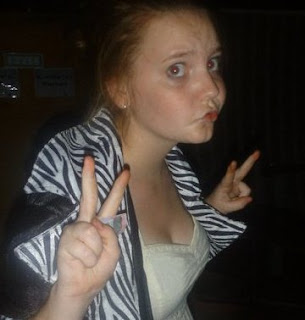 I'm not dumb. I just have a command of thoroughly useless information.”


My Star is beautiful & flakey & she has very decided opinions of her own ~ especially when it comes to schooling.  The family stories about Star are rife because Star has never been one to be overlooked!  Most of her siblings carry scars in memoriam of battles lost to their little sister & the tale of Grandma & the jam spoon has flowered into epic & legendry proportions.  Most of the household would do anything to avoid one of Star's hissy fits.  Pity her dear mamma, who was assaulted on 2 fronts & unlikely to win either battle.

Thank goodness Star's siblings were in school for most of her early years while we worked on her less desirable character traits.  In fairness to Star it must be said that on her own she was an exceptionally easy child to deal with.  I could take her anywhere & she would behave impeccably.  The only real meltdown she ever had was the one & only time I tried a wrist strap with her.  She was devestated I thought her incapable of behaving like a real person.  We ditched the strap & Star is the only child I was unlikely to lose in the shops.  She always stuck to me like glue.

Star is number 5.  By 5 you've learnt something about the sort of kids the Lord is likely to give you.  In our case that has always meant really, really smart ~ but they'd rather be anywhere but in school.  I was so over the school thing.  In my mind I was never putting this child in school.  I just felt too old, too tired ~ too over it ~ to dance round a system that does not know how to cope with the unusual.  I'm pretty sure long term homeschooling is not what her father had in mind for his daughter when we started out but luckily Star is highly susceptable to chocolate & not above bribery!

As I've explained before the child did get the odd day in a regular classroom.  I was working & the grade teachers loved her.  She was quiet, obedient & easy to work with but Star never had any desire for prolonged stays.  No sane child wants to be locked up for 6 hours a day!  Despite appearances Star has always been very sane.  Then about grade 9 that all changed.  I have no idea what brought it on.  Some stupid, glamourised t.v show where high school is portrayed as one long exciting drama perhaps.  Wherever it came from Star was on a roll.  She wanted to go to school.  She was desperate to go to school.  We were the cruelest parents on the planet for denying her what every other child in the universe accepted as their right! *sigh*    On & on she went.

I might have caved if the schools round here were better but they are all pretty awful.  I told Star she could have school or she could have her music but both she could not have.  It wasn't much of a risk.  It was always a given Star would plump for her music.  That didn't mean she had to cave gracefully ~ & she didn't.

This year when our primary school ran its Support~a~Reader training program Star signed up for it.  While I am in school Star is teaching grades 2 & 3 how to read.  They call her Miss Star, which we all find very funny.  The teacher adores her.  She can be prevailed upon to stay a little longer & help out as a teacher's aide.  The kids adore her.  What's not to adore?

Every day when I get home I check in with Star as to how her day has gone.  She was a little spun out to realise she is now doing the job I once used to do.  She was a little cagey at first.  She gave herself time because the everyday experience of these kids has never been Star's everyday experience.  She had no real idea how a classroom operated or what happened in the course of a normal school day.  All these things were outside her experience. [Her teacher flipped out a little over that! ☺]  And then the other night, having discussed how her day had been interupted by Class Photos & Rescheduled Lessons, Star turned to me & in all seriousness said,"It's a good thing you never sent me to school.  I would have turned into the most horrible child!"

One of the greatest parental moments: when our child(ren) finally realize we made the best decision we could at the time. Glad your Star has realized that she's best where she is. :)

Precious! She looks fabulous by the way. Does this mean her own schooling days are over?

ha ha, lol at Star's comment:) I hope my dd says the same in time!

I was just thinking the other day what I really wanted when I was my daughter's age and although I was a mostly "A" student then, I remember thinking that how much school got in the way of what I really wanted to learn and do, and everything was on their timetable, not mine. I do not mean, just the daily schedule but what subjects were available and when. I would have loved taking a language in middle school, but no, that is only offered in high school. I would have read so many more books and worked at higher math just for fun and worked on artwork alone at least half of most days, probably.

I cannot undo what I was given to do, but I can now give my child what she should do through homeschooling. I just question if that is what I am doing sometimes.