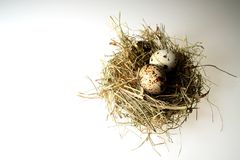 WE ARE NOW HERE:
http://fennixz.blogspot.com.au/
Posted by Ganeida at 2:43 AM No comments:

I love blogger but it has issues.  It does not want to send me my emails.  It does not want to notify me when your blogs are updated.  It spits comments & now...NOW it will not let me post pictures. Consequentially [yes, blogger there are consequences to your actions *sigh*] I have shifted house.  Yet again.  Sadly I could not keep my old user name but it is still the same old Ganeida.  So if you would all kindly update your links.....Gratias. Here is the new one.
Posted by Ganeida at 3:58 PM 4 comments: 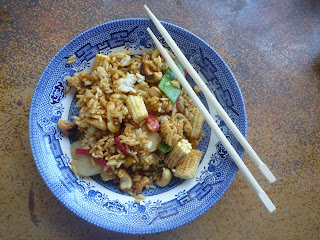 With the advent of summer we are eating more salads.  Doesn't everyone?  Only having grown tired of the regular offerings I went on~line looking for something both tasty & filling.  This ginger~soy rice salad is exceptionally yummy.
Posted by Ganeida at 6:51 PM 5 comments: 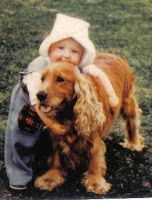 Several years ago I was chatting with the Lord, as you do, & the Lord gave me this scripture:

﻿The word of the Lord came to me, saying,
“Before I formed you in the womb I knew you,
before you were born I set you apart;
I appointed you as a prophet to the nations.”

﻿Sad to say my initial reaction wasn't even:

When I realised the Lord was serious about this I went into denial.  And the Lord just kept thrusting this scripture at me until I reluctantly accepted that it was so.

I quietly flipped.  I knew nothing about New Testament prophets.  I did not, never had, belonged to a church that had a 5~fold ministry.  What I read was not particularly helpful but when the Lord calls He also euips & so I found myself at Rhema Bible School.  This was still not particularly helpful ~ at least as regards the prophetic.  It was however helpful in grounding me in dealing with the charismatic.  I know it's weird but seriously people this whole house was operating in the charismatic gifts & totally clueless.  Absolutely no idea.  How could we?  We did not belong to churches that taught on this.

When I asked the Lord [as you do ☺] why I was in Rhema His unequivocal answer was *Preaching & Teaching*.  Ok. *sigh*  I pottered along, just trying to be obedient, struggling with the extroverted elements of the charismatic that made me cringe & the Lord waited patiently.  Firstly He showed me how the use of Tongues could help me centre more quickly allowing me to hear from Him more accurately ~ & yes, I know some of you don't go there.  All I can say is the proof's in the pudding & it works.  Then I got teaching on the anointing which helped me understand what was happening when I preached & how to flow with God's Spirit much, much better.  Then the Lord showd me how the Prophetic works for me in preaching & teaching because I always ask, always have, what the Lord wants me to say to His people.  And the change the Lord had me institute was to have my outline, have my scripture then leave Him room to flow through me so that in essence I was shining a light on the path the Lord would have His people walk. Whew!

And I have found myself in a most amazing place.  I have a deeper awareness of God's Spirit within.  My love for my Lord & Saviour just keeps growing until there are moments when I feel like I am about to explode from not being able to contain it!  I am preaching with much more confidence, & authority.  Far less of me, far more of God.

And having gone to great pains to get me into school & headed where He wants me headed, the Lord also opened up preaching opportunities.  I have been getting 1~2 a month, some short, some full length.  Getting my research done while studying, travelling & evangelizing has not always been easy but being able to move more freely in the Spirit has really helped here too.  And the little church where I am ministering is starting to grow ~ enough that the Lord is speaking to me about the church preparing to deal with an influx.  You read here.  You've heard me blather on often enough  on this subject & I know it's the Lord's heart also.  It's one thing to get bums on seats.  It's another & different thing to get people saved but it is a whole 'nother ball game to grow believers to maturity ~ & that takes the whole church!  Working together. *sigh*

It's not that I don't like people.  Truly it's not.  But I'm a Big Picture thinker.  Visionary.  I get frustrated when the people start lagging behind God's vision & I know I have to be patient.  So very patient.  Like God is with me. Yep.  Just like that.

Summer in the garden.

One benefit of summer was that each day we had more light to read by. ~Jeannette Walls 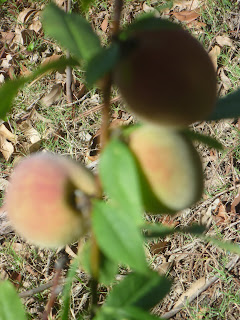 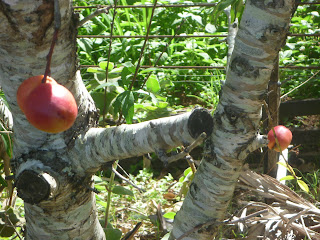 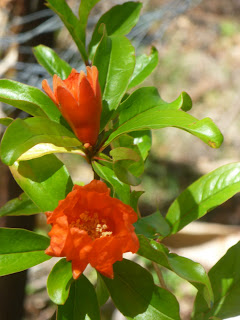 Promegranate flowers; the promise of things to come.﻿
Posted by Ganeida at 3:35 PM 2 comments: 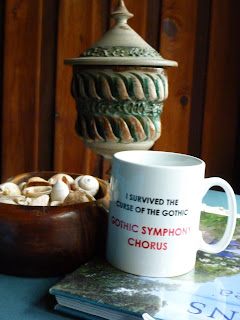 This is one performance that just goes on & on but Queensland peeps, if you are interested, this show finally goes to air on the ABC this year.

A Variety of Wildlife.

You know you're less than urban when this amount of wildlife lands on your doorstep in a matter of days... 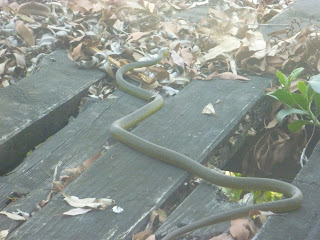 The tree snake that lives in the creeper outside the door.... 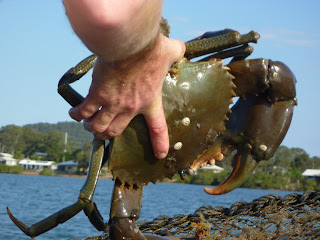 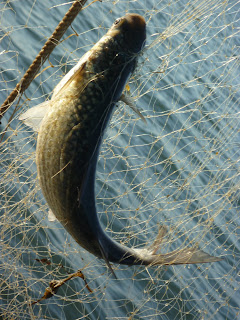 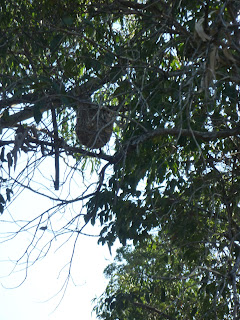 The friar bird nest outside Dino's window.  Let's hope that this year they don't raise a cuckoo.... 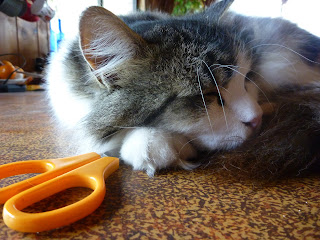 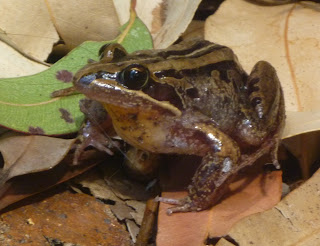 ﻿Who brought home this Striped Marsh Frog so gently, for Star.  Not hurt at all & Star released it back into our garden.  The link will let you listen to its call, which we * hear* so constantly all year we no longer actually hear it!
Posted by Ganeida at 4:32 PM 7 comments:

Dream no small dreams for they have no power to move the hearts of men.”~ Johann Wolfgang von Goethe 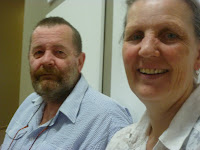 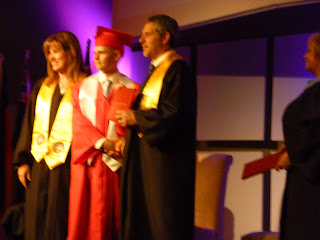 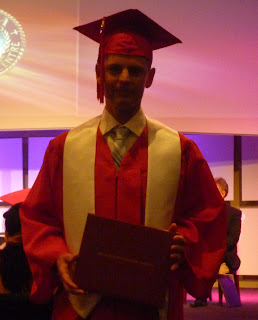 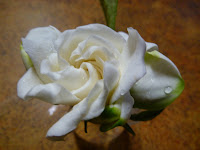 Whew!  Everything is whirling into end of year madness ~ but at least certain things will then stop.

This week I had the school's homiletics class ~ which means I had to present something because Rhema is all about being a doer of the word, not a hearer only.  This would have been less of a problem if I were not also  preaching on Sunday ~ which would be less stressful if Dino was not graduating on Saturday....& we also have a seminar on the Thursday & break up on Wednesday.  Meanwhile I have been sitting up till midnight to co~ordinate the last of Star's work ~ the last time ever I will have to do this so a bitter sweet moment.

Always prone to panic attacks where no panic is necessary I was just a tad upset as the homeletics class was the only class I had approached with any semblance of confidence, boosted by the fact most of the class had hit a bigger panic button than mine over *public speaking*!  Not me.  I minored in drama at Uni.  If nothing else I was confident in presentation, though after a week of the Dean's bracing comments on what to do/not do I decided ignorance was definitely bliss!  Anyway, having gone to the Lord in a panic He reminded me I had been rehearsing this testimony for weeks in my head & it was just a simple matter of putting some scripture to it.  I was pleased with how it went.  It is far more nerve wracking to speak before a woman who has spoken around the world to large audiences than our little island congregation.  Dino did his today ~ very good though inexperience meant he didn't finish as he wanted having misjudged his time.

I have Friday at home ~no classes~ & though we will go over for church as usual I will at least be able to use that day for Sunday's preparation.  I have been getting a regular spot each month, enough to keep me in practice, not enough to overburden me while I am in school.  I realised today how blessed I am to be getting that regular practice.  I am *performance hardened* as Star would happily inform me.  It's not that I don't still get nervous, because I do, but I know how to deal with it.  It is not debilitating.  I know how to engage with an audience.  What I have to watch is how I feed of the audience! lol

I am looking forward to Monday when all I still have left to deal with is is Star's singing.
Posted by Ganeida at 10:20 PM 4 comments: 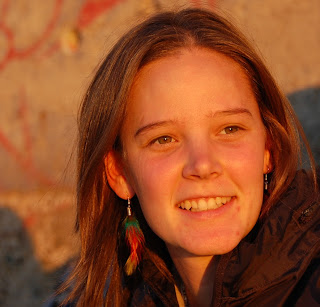 Liddy has Blogged.
Posted by Ganeida at 4:30 PM 3 comments: